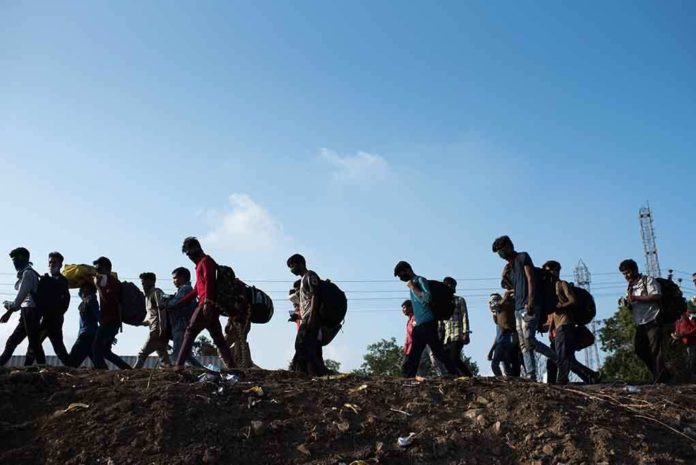 (TruthandLiberty.com) – While the Biden administration tries to convince Americans the country has a closed, secure border, events continue to suggest otherwise. Breitbart News reported about a video showing 100 migrants crossing the border near Eagle Pass, Texas. Within an hour, another 150 emerged.

Breitbart said its reporters observe large numbers of migrant groups crossing the Texas border from Mexico every day, and the outlet reported Customs Border Patrol (CBP) agents saw over 170,000 illegal immigrants apprehended in June, with several days still to go. Sources said the US government returned fewer than 33% of them under Title 42. Those figures persist despite a federal judge requiring the Biden administration to enforce the health measure and encourage CBP to expel illegal immigrants immediately.

More than 250 migrants in separate groups were witnessed crossing into the city in the span of an hour Monday night. https://t.co/shtyX5QKHh

On Monday, White House Press Secretary Karine Jean-Pierre told reporters the border was closed. She blamed the illegal immigration problem on US policy, forcing the border closed and preventing migrants from entering the United States.

The news at Eagle Pass comes as the Biden administration grapples with a tragedy after smugglers tried to hide illegal immigrants in a sealed tractor-trailer. Nearly 24 Mexicans, seven Guatemalans, and two Hondurans died. Even more people fell victim to the extreme conditions, but their numbers and countries of origin are still under investigation. Mexican President Andrés Manuel López Obrador blamed the Biden administration’s “lack of control” at the southern border and unscrupulous human traffickers for the horrendous situation unfolding in the region.